These activities need people! Get your students active by acting out mathematical ideas and concepts. They will understand the concepts better if they have taken part in these activities.

Whether it be the strategy for winning a game or a better understanding of loci a kinaesthetic experience beats pen and paper once in a while.

The people line up in two rows at opposite ends of the room. In the centre of the room are nine chairs arranges in a three by three grid, each chair no closer than one metre to the next chair.

The people in the rows are numbered off from one to how ever many people are in each row. One row are the noughts and the other row are the crosses.

The leader (teacher) calls out a number at random. The person in the noughts team and the person in the crosses team with that number rush to sit on a chair in the grid. The first person to touch the chair can claim that chair.

The first team to get three of its members in a straight line wins!

The people are numbered and hold an edge of the parachute and mushroom it to the teachers directions. As the parachute is in the air, certain people change places.

Lay the parachute on the ground and discuss circle properties. Establish an approximate value for pi by pacing across and round the parachute.

To generate the number sequence associated with this game see the formula you could use in a spreadsheet.

The teacher selects two walls of the room to be the axes. Students stand in a position in the room that represents their data. There are no scales on the axes so they have to imagine a scale which ranges from the smallest value in the class to the largest value in the class. Here are the Human Scatter Graph ideas.

The teacher will organise for three large intersecting circles to be marked on the ground with chalk, string or rope. Students stand in a position in the circles (sets) that represents their data. Here are the Human Venn Diagram ideas.

Students should be encouraged to stand up and make the shapes of the graphs with their arms. The mirror is there to check what their reflection should look like. Here it is: Human Graphs.

People sit in a circle (representing the world!). One person stands behind one of the seated people. The teachers asks a "quick fire" Maths question to the person standing and the person seated in front of them. Whoever gets the correct answer first moves to stand behind the next person in the circle. The other sits. The first person to get all of the way around the world is the winner.

If you don't have a group of people to play Fizz Buzz with you might like to try our online Fizz Buzzer game.

This topic has been successfully introduced by getting the students to stand at a position in the classroom, gym or playground according to some rule.

Here are some examples:

A great evening time activity at a residential Maths weekend has been the 'Candle Square Spiral' creation:

Repeat the last two instructions until all candles have been positioned. Everyone should now see the square spiral pattern from their vantage point!

Can you see from the diagram above what the finished pattern might look like after everyone has put down their candles? In the dark of the evening it looks quite stunning.

The students numbered 1 to 8 should sit on the chairs so that no two consecutively numbered students sit next to each other either vertically, horizontally or diagonally.

Is it possible? If so, how many different solutions can you find? 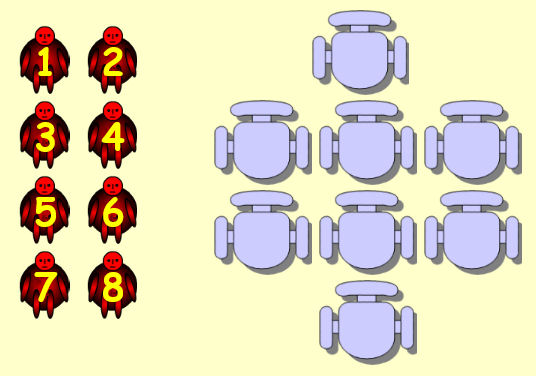 The online, interactive version of this activity is the lesson Starter for June 17th.

Students could be numbered using bibs from the PE Department or you can easily make numbered hats from strips of paper. 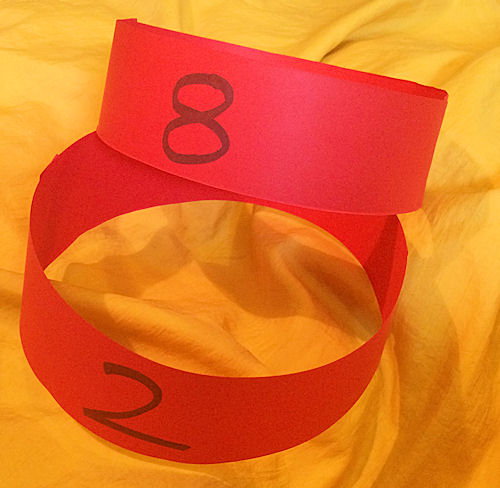 This activity is great fun when done with real chairs, real students and real teamwork. Make eight numbered hats from strips of paper, arrange the chairs then sit back and enjoy listening to the discussion.

This People Maths activity is about students estimating amounts and then seeing how their estimate compares with the estimates of other students in the class. It is the Starter of the Day for the 19th July.

You can do this in your classroom but you may need to move the desks and chairs back a few metres to allow all of the students to stand in a clear area between the two walls of the classroom. Project the Positions Please page on your whiteboard then sit back to watch how your students decide where to stand.

The value of this activity can be found in the discussion that takes place!

Do you know any other "People Maths" activities?
Please let me know.

A mathematical adventure game in the enigmatic home of Transum. Create your own map as you go deeper and deeper into this maze of rooms looking for the clues to find the treasure room.

Complete a table of values then plot the corresponding points to create a graph. So far this activity has been accessed 29173 times and 778 Transum Trophies have been awarded for completing it.

Try some of the other areas of the Transum Maths website:

Comment recorded on the 24 May 'Starter of the Day' page by Ruth Seward, Hagley Park Sports College:

"Find the starters wonderful; students enjoy them and often want to use the idea generated by the starter in other parts of the lesson. Keep up the good work"

Comment recorded on the 10 September 'Starter of the Day' page by Carol, Sheffield PArk Academy:

"3 NQTs in the department, I'm new subject leader in this new academy - Starters R Great!! Lovely resource for stimulating learning and getting eveyone off to a good start. Thank you!!"

Comment recorded on the 1 February 'Starter of the Day' page by Terry Shaw, Beaulieu Convent School:

"Really good site. Lots of good ideas for starters. Use it most of the time in KS3."

"The FizzBuzz game can be adapted to lower multiples eg 3s and 5s to make the game easier.
You can choose other properties too like Primes and Squares
A final one - use 3s,5s and 7s call it FizzBuzzWuz then play as before - this even catches teachers out!"

"Here is an article from the TES about creating a 'human pie chart' in your maths lessons. For this Year 6 teacher, teaching pie charts in maths was always a struggle – until he found two unique ways to transform his approach: Full Article. "

A blog post about the Human Galton Board activity I did with school students last week (with only a couple of hours' planning!). #mtbos #mathschat https://t.co/tnR8LfDxhZ pic.twitter.com/ZDwOgwV7Px

Do you have any thoughts about the mathemagic above? Do you know any mathemagical tricks that we could share with the world on this page? Click on the link below to submit your ideas.