Here are some mathematics lesson plans to be used on the rare occasions when a class is left without their normal teacher and you are stepping in at a moment's notice.

Call the class together for a plenary recapping the core ratio concepts. The Random Name Generator could be used at this point.

The activities above will probably give you a series of lessons rather than just one.

It doesn’t happen very often but sometimes you find yourself in the position of having to deliver a lesson at a moment’s notice. In the worst case scenario you do not know what the class have previously been learning and you have been given no information about the nature of the pupils from their normal teacher.

These lesson plans have a low threshold, high ceiling so can be great learning opportunities for a wide range of pupils and class dynamics. No preparation is required as all of the activity details can be found by clicking on the links in the plans.

If pupils complete the activities online and earn trophies as a record of their progress teachers (who are Transum subscribers) can see from their class list which pupils have earned which trophies.

Furthermore if pupils do have access to internet connected computers see Laptops In Lessons for more lesson plans. If they have iPads there are some ideas on the iPad Maths page.

You can save a link to just the lesson plan you choose from the selection below.

There is a printable page called Lectio Tumultuarios (Latin for Emergency Lesson) designed for Maths tutors (who are Transum subscribers) to have printed and stored in their folder ready to use on the odd occasion when a quick five minute time filler is required.

"My extreme emergency lesson (back in the day) was the Four Fours challenge. It was sort of an HCF of all the classes I was likely to have to cover and required no equipment or preparation. 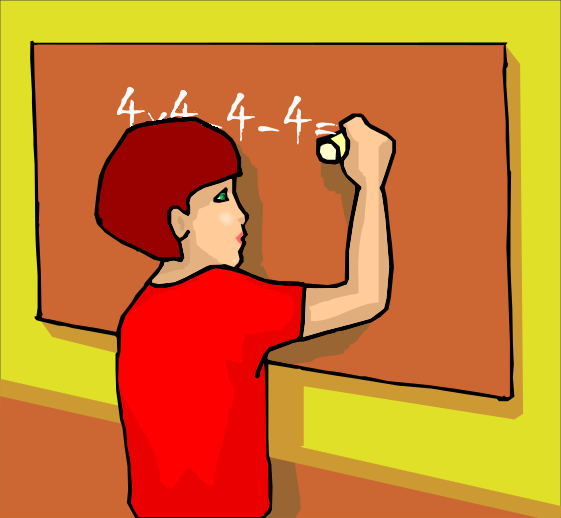 The objective of this challenge is to find the simplest mathematical expression for every integer from one to some maximum (depending on the class), using only common mathematical symbols and four copies of the digit four.

Nowerdays if you want to issue this challenge to a class you could do it using a different digit by using the 4th July Starter page as a projectable visual aid."