Back To School for Percy Cod's Kids

This is the Transum Newsletter for the month of September. When I was a pupil, September was thought of as the Back to School month but I'm now aware that around the world this is not the case for everyone. So for some, happy new school year, and for everyone else I hope things are ticking along nicely.

Here is the puzzle of the month:

The answer will be at the end of this newsletter but while you think about that here are some of the key resources added to the Transum website during the last month. 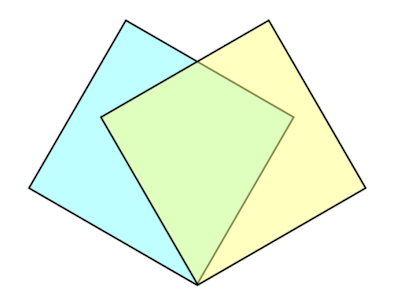 I finally got rid of that Starter featuring a mobile phone that looked like it had come out of a museum. I have replaced it with Overlapping Squares which is an animated visual aid challenging pupils to investigate the shapes that can be made when two squares overlap. I would love to hear how well this activity works with your pupils.

Divides Exactly is another new activity in which pupils complete a division table with only the quotients that are integers. When one of the levels has been completed pupils realise that their effort was timed and rather than claiming the trophy immediately they could have another go at completing the level in a faster time. All good mental arithmetic practice leading to a more formal appreciation of the divisibility tests which are listed under the Help tab.

Standard Deviation is a multi-level exercise with a difference. Unlike traditional exercises on standard deviation this version begins by asking pupils to estimate how spread out the data in similar sets is. This drag-and-drop introduction encourages learners to 'get a feel' for the notion of dispersion.

The Maths of Gambling was written when last month I heard of Kelly's Criterion. This was new to me and quite fascinating. The very simple formula determines how much of you gambling money you should bet each round to have the best probability of long term wealth! This activity is presented to help pupils learn more about probability so that they are less likely to become future gambling addicts.

For those of you teaching the International Baccalaureate Diploma new Mathematics SL courses I have added the syllabus statements as links to related activities and exam questions. Here they are: Analysis and Approaches :: Applications and Interpretation

This time last year I was writing in the newsletter about the Trafalgar Square puzzles and I mentioned that there was still one unsolved. Well one year later I can still report that one of the puzzles I photographed drawn in chalk on the pavement around Trafalgar Square in London is still unsolved. Have a look at it, you may be the one who sees the light!

This month I would like to welcome new or returning subscribers from the United Kingdom, the United States, New Zealand, Australia, Korea, Hong Kong, and Indonesia. It is so exciting that Transum is used around the world and consequently around the clock.

Don't forget you can listen to this month's podcast which is the audio version of this Newsletter. You can find it on Stitcher or Apple Podcasts. You can follow Transum on Twitter and 'like' Transum on Facebook

Finally the answer to this month's puzzle:

His oldest child's age would then be 3n according to the first ratio given.

In ten years' time the children's ages would be 3n+10 and 2n+10 which we are told are in the ratio 7:6. This information can be used to form the equation:

So Percy's youngest child is five and his oldest is seven and a half.

PS. What did two and eight say to five? You are always mean to us!